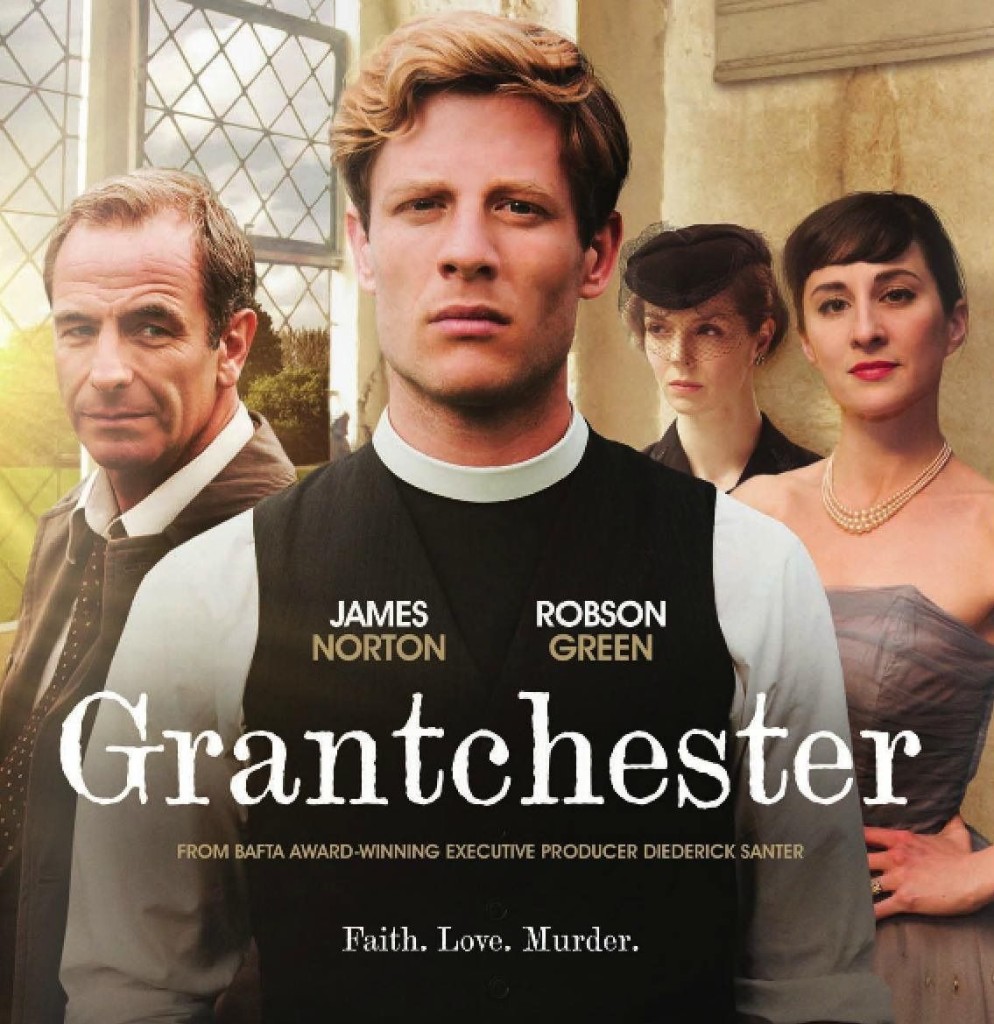 Grantchester is a British TV detective drama featuring an investigative Anglican priest, Sydney Chambers (played by James Norton) who teams up with a real detective, Geordie Keating (played by Robson Green) and together they go about solving crimes in their small town of Grantchester, just off Cambridge along the River Cam. The time setting is 1953 only a few years after World War II.

The series is a more complex version of Father Brown, another TV series featuring a nosey Catholic priest who always manages to upend the real detectives. And just like Father Brown’s Mrs. McCarthy, Grantchester has its Mrs. Maguire (played by Tessa Peake-Jones). Unlike Mrs. McCarthy though, Mrs. Maguire’s life is far more complicated than

Grantchester is Father Brown on turbo. While together Sidney Chambers and Geordie Keating go about solving crimes, their disposition and outlook in life are as disparate as wine and beer – the latter of which they do share heavily together. A common scene in the series is the local pub where not only beer is poured, but all the heartaches and joys of the two men are poured out as well.

As an Anglican priest, Sidney has to stay close to the tenets of the Church. And no test for his faith could be more challenging than expressing his love for Amanda (played by Morven Christie). Amanda had been his long-time friend, a friendship that presumably started platonically but which, over the years, blossomed into real romantic love. Alas, by the time Sidney realized his true feelings, Amanda was betrothed to another man and was soon married.

The real conflict, however, does not start until Amanda decides to leave her husband, to divorce him, and she goes back to Grantchester. And here’s where the love story really crescendos to a deafening contrapuntal of their romantic symphony. An Anglican priest cannot marry a divorcee. So should Sydney leave the priesthood which he loves so much, or stay and leave Amanda and her baby girl?

Geordie, on the other hand, had no qualms about having an extramarital relationship with his secretary. In spite of a loving wife, two beautiful girls, Geordie was too weak to resist the temptation of youth, beauty, and the thrill of an affair. This affair was always a point of contention between Geordie and Sidney, a point that very often tested the very fabric of their friendship.

The other characters are fascinating as well, especially that of Leonard Finch (played by Al Weaver). Leonard is assistant to Sidney who is not only struggling with the demands of the job but also with his sexuality. The show also highlights the challenges faced by the Church of England even at that time. Amanda at one time, in desperation, had to ask: “How can a church founded because of divorce not allow divorce?” She was referring to the fact that Henry VIII founded the Anglican Church because the Pope then refused to allow him to marry Anne Boleyn because he was still married to Catherine of Aragon.

And the series is steeped in jazz. The John Lunn composed the main score. A Scottish composer, he also wrote for Downtown Abbey, among others. However, Sidney Bechet, Gloria Dee, and the other great jazz performers come up in almost all episodes as Sidney is a jazz aficionado (he refuses to be called such). He has his portable vinyl player which he always plays when contemplating with a neat glass of scotch on the one hand and a cigarette stub on the other. So, yes, this is the other reason why I love the series.

Led by James Norton who was nominated for Best Actor by Broadcasting Press Guild Award in 2017, the acting has been excellent, definitely of the highest level. Robson Green plays the detective with the earthy common sense which, often times, runs contrary to the “big picture” logic of Sidney. Tessa Peake-Jones who plays Mrs. Maguire is apt for her role as the purveyor of good morals and proper behavior. With her pursed and stiff lips, she never fails to tell the people around her when infractions against the Church are being committed. Morven Christie as Amanda is lovely as she comes out as this fragile woman whose inner strength comes from her determination to keep the flames of her love for Sidney burning.

I stopped watching the series after the penultimate episode of Season 3. There is a Season 4 with a new priest…that is why I will not watch the last episode of Season 3. I hate tragedies in movies or TV – there are enough real-life tragedies for me to deal with these days. I want to preserve Sidney and Amanda as they are up to that point (SO3 EO6). My kids find it funny that I do not want to watch movies where the main character dies. I sometimes go to the extent of watching a series in reverse – I start with the last episode first!

Don’t mind my quirk – watch Grantchester on Prime Video. It is a series whose stories about murder are riveting but whose characters are full of life and inspiration.